A court in Lucknow in case of Preeti Goswami/Giri vs Neeraj Goswami and others has dismissed a domestic violence case holding allegations made by wife as either unbelievable or concocted. It has rejected the plea for maintenance by the wife as well. Thread baring every allegation put forth by the wife, it cites reasons why they don’t withstand scrutiny of the court. The decision comes 8 years after the case was filed.

SALIENT FEATURES OF THE ORDER

Wife files domestic violence case on husband, his old parents, uncle aunt and brother who lives abroad. Court takes into account that from evidence produced by the husband, it is the wife who actually inflicted violence on his family members. Other accused i.e uncle aunt never stayed with the couple ever and live in a far off city. Brother of husband stays abroad and had only attended the wedding after which he joined his job back abroad.

She claimed her father spent 14 Lacs in the wedding and gave dowry beyond their means. Court questioned her claim on the grounds that her father held a very small rank in police and spending such a huge amount on wedding couldn’t be possible. Moreover no evidence was put forth to establish this claim.

Wife claimed her in-laws tried to burn her by puring hot kerosene on her within few months of marriage demanding dowry. The court refused to believe this claim as no complaint was ever made in this regard by her in any police station. Moreover she continued to stay with the husband and his family for a long time after this alleged incident and also conceived for the second time despite this alleged cruelty. It also asked as to when the woman’s own sister was staying in the same city, why wasn’t any complaint made to her or a police complaint filed by her in case she got to know about it.

Wife claimed her family gave 3Lacs to husband’s family during wedding. Husband proved with evidence that out of the said amount, maximum was spent on purchasing things for the woman herself as requested by her family. So the amount was given to make purchases for the woman only and not as dowry.

Wife claimed that the husband and his family beat her up , forced her for abortion, after which she went to the hospital and her sister paid the bills for the same. Husband proved with evidences that the bill was paid by him and the instance as cited by her was false and malicious.

Wife demanded maintenance from the husband. Court rejected the same saying she is a well qualified lady who can earn and her claim for maintenance isn’t justified.

The court notes the fact that it is infact the wife who was cruel to the husband and his family. She had beaten up her mother in law , a complaint of which was also filed by the husband’s family.

Court threadbares every single allegation made by the wife and how it is either unbelievable or false and malicious in entirety. Finds the case to be dismissed completely in light of facts of the matter.

Now the reality put forth by husband:

The alliance was done through a matrimonial site where the couple mutually decided to get married. From the beginning, woman refused to take care of house responsibilities at all saying she is an educated, working professional and not made to do such things. Her first pregnancy was aborted by her own will and she went to a hospital with her sister and got the child aborted. In influence of her father who was in police, the woman used to threaten the husband’s family of implicating them in false cases and tortured them mentally. She pressurized the family to give 5-6 Lacs to her brother and accommodation in gurgaon for starting a business but when husband refused to do so, she fought with the entire family and left the matrimonial home and never returned after that. 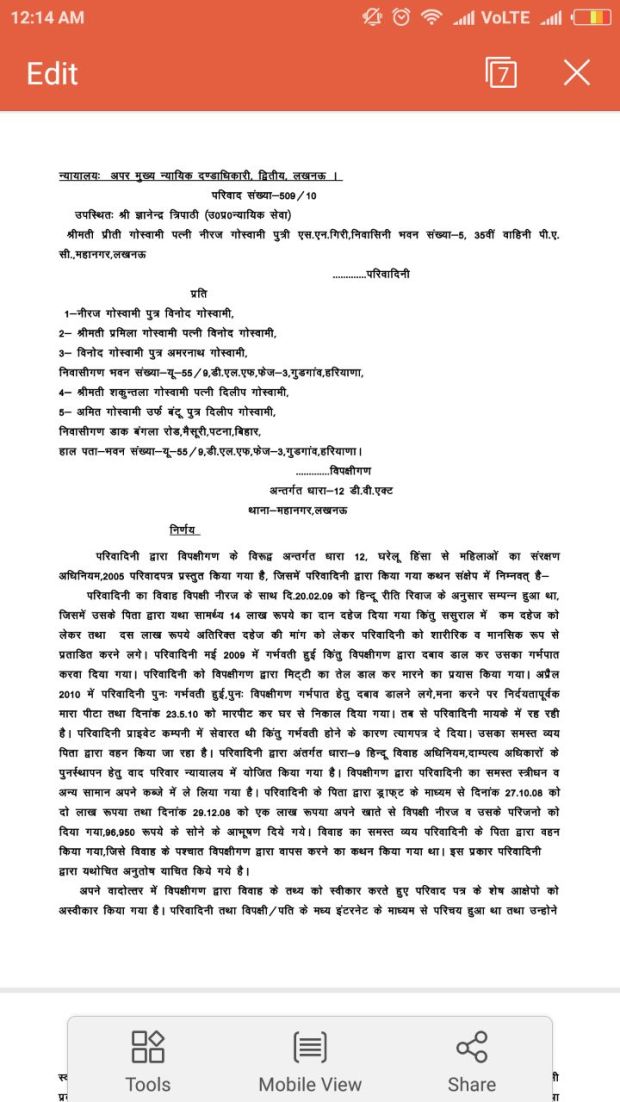 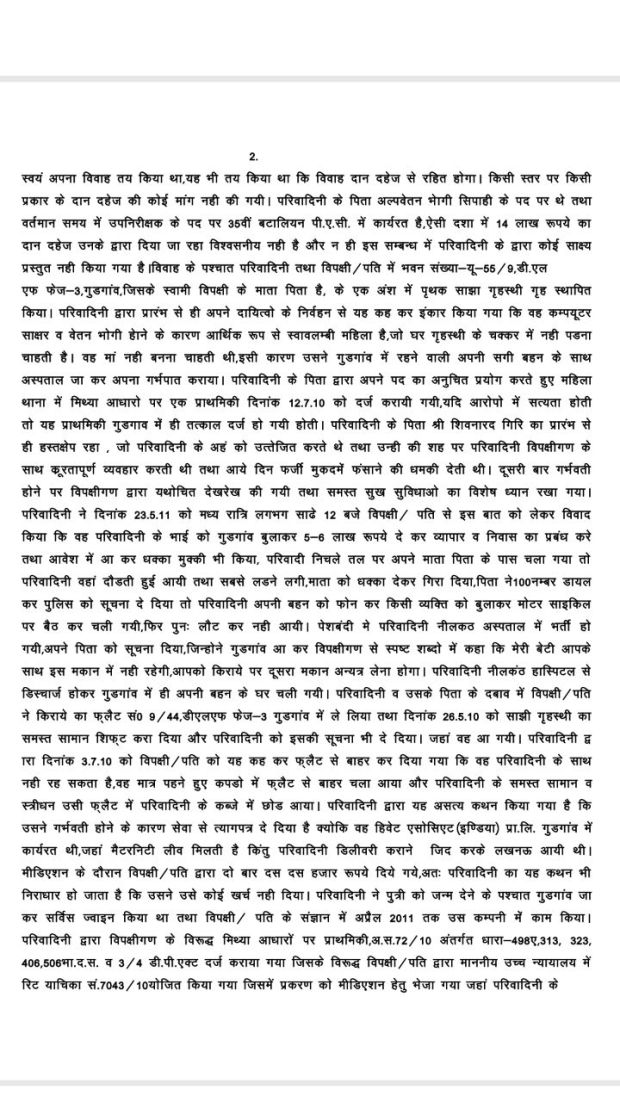 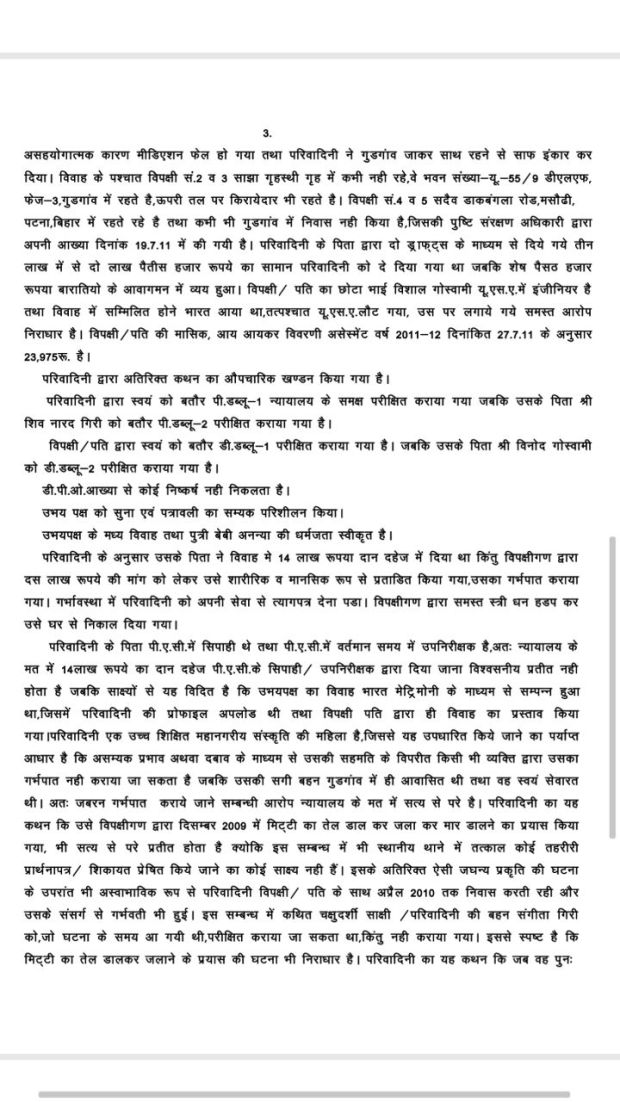 Editors Note: I, Deepika Narayan Bhardwaj was also impacted by the wrong conduct and false complainant  mentioned in this blog. Just because I was in touch with this family and asked them to take action on her wrong doing as well, she tried to implicate me in a frivolous criminal complaint. Police never pursued the case against me because they understood it was false and vexatious. A link to my story related to this case :  https://m.facebook.com/story.php?story_fbid=1706412826069137&id=812991898744572

Disclaimer: This is not exact word to word translation of court orders but a gist of the highlights of the case. Other litigations among the litigations are still pending in the court and this blog doesn’t intend to influence those as at all.